Here’s one for the lesson books – Square (SQ) had a euphoric or parabolic rally that gave way to the all-but-inevitable snap-back crash straight into a key support price.

Here’s the Euphoric Rise that gave way to the Stellar Collapse: 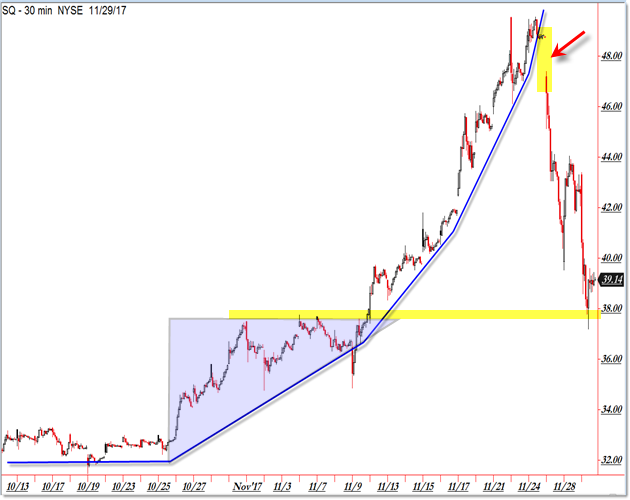 Square (SQ) is a new stock that you may not have traded yet but it’s sporting a classic pattern of a euphoric (unsustainable) rally that just gave way to a textbook collapse event.

Despite a strong higher timeframe uptrend, price stabilized (intraday chart) at the $32.00 per share level and built a rally toward $38.00 per share.

At that point, a clear Ascending Triangle Pattern developed which triggered a bullish breakout entry above $38.00 on November 10th.

Price got ahead of itself, surging straight up into a “Parabolic Arc” or “Euphoric Top” pattern that set the stage for the pain of a collapse after the pleasure of the euphoria.

Traders are encouraged to avoid trading INTO the late-stage euphoria (bullishly) due to the risk of a price collapse.

Similarly, bears are discouraged from short-selling a euphoric pattern event like this because price can remain overbought and irrational – and surging higher – beyond your ability to sustain a reasonable risk or stop-loss strategy.

VERY aggressive traders can engage short on the breakdown – in this case a gap – beneath the rising “arc” or adaptive trendline.

We’ve achieved our first target of the initial breakout from the original Symmetrical Triangle.

Follow along with members of the Afraid to Trade Premium Membership for real-time updates and additional trade planning.

Corey’s book The Complete Trading Course (Wiley Finance) is now available along with the newly released Profiting from the Life Cycle of a Stock Trend presentation (also from Wiley).”

Japan and the Euphoric Volatility Trap

Howard Hughes Corp: A Lesson in Price vs Value

The next Tiananmen Square? Chinese citizens are demanding increased free speech after the death of a coronavirus whistleblower doctor. China is…