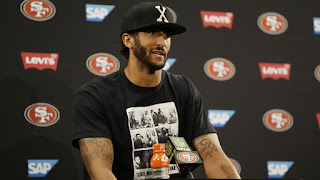 It is apparently lost on young Mr. Kaepernick that while he is speaking out against oppression he is also wearing a T-shirt glorifying Fidel Castro. The contradiction means nothing to him and is evidently beyond his ken. This is pitiable. But what else to expect from someone who has equated the American flag with the Confederate flag and gone as far as to say if you do not see that then you are ignorant of history. Dear me.

Someone also indicated to me that he had a discussion about raising the minimum wage the other day. He disagreed and said it was a bad idea. The other person called him a racist. Boom, end of discussion.