> Home / Forex News / Swiss Franc is the Only Safe Haven Currency. The Franc is Starting to Distance Itself from the Dollar and Yen.

According to conventional market wisdom, there are three safe haven currencies: the Swiss Franc, Japanese Yen, and US Dollar. It is to these currencies that investors flock whenever there is a crisis, or merely an outbreak of uncertainty, and for much of the period following the collapse of Lehman Brothers, the three were closely correlated. As you can see from the chart below, however, one of these currencies has begun to distinguish itself from the other two, leading some to argue that there is now only one true safe haven currency: the Swiss Franc.

What’s not to like about the Franc? It boasts a strong economy, low inflation, and low unemployment. Unlike the US and Japan, Switzerland is not plagued by a high national debt and perennial budget deficits. Its monetary policy has been extremely conservative: no quantitative easing, asset-purchases, or any other money printing programs with euphemistic names.

Ironically, the only thing that makes investors nervous about the franc is that it has already risen so much. Remember when it reached the milestone of parity against the dollar in 2010? Since then, it has appreciated by an additional 20%, and seems to breach a new record on an almost weekly basis. The same goes for the CHF/EUR and CHF/JPY. The President of Switzerland’s export association is expecting further gains: “Parity is a realistic scenario. Given the indebtedness of the eurozone and the strong attraction of the franc, the euro is likely to continue to lose value.”

Given that Swiss exports have surged in spite of (or even because of) the rising Franc, however, he has very little to worry about at the moment. As you can see fromt he graphic below (courtesy of the Financial Times), the balance of trade continues to expand, and has exploded in a handful of key sectors. To be sure, economists expect that this situation will eventually correct itself and are already moving to revise downward 2011 and 2012 GDP growth estimates. Then again, they made the same erroneous predictions in 2010. 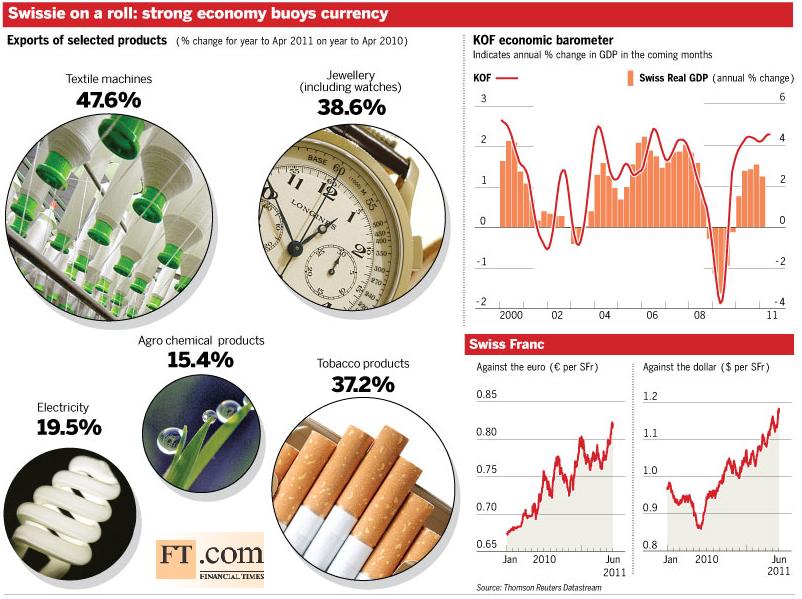 The main variable in the Swiss Franc is the Swiss National Bank (SNB). Having booked a loss of CHF 20 Billion from failed intervention in 2010, the SNB is not in a position to make the same mistake again. In fact, SNB President Philipp Hildebrand has not even stooped to verbal intervention this time around, undoubtedly cognizant of the fact that he has very little credibility in forex markets.

At the same time, the SNB is not in any hurry to raise interest rates, lest it stoke further speculative interest in the Franc. Its June meeting came and went without any indication of when it might tighten. Interest rate futures currently reflect an expectation that the first rate hike won’t come until March 2012. Thus, the downside of holding the Franc is that it will continue to pay a negative real interest rate. The only upside, then, is the possibility of further appreciation. Fortunately, the SNB is unlikely to stop the Franc from rising, since it serves the same monetary end as higher interest rates. In other words, a more valuable Franc serves as a direct check on inflation because it lowers the cost of commodity imports and should (eventually) soften demand for Swiss exports.

It is possible that the Swiss Franc will suffer a correction at some point, if only because it rose by such a large margin in such a short period of time. On the other hand, given that its economy has proved its ability to withstand the Franc’s appreciation, it’s no wonder that investors continue to bet on its rise.