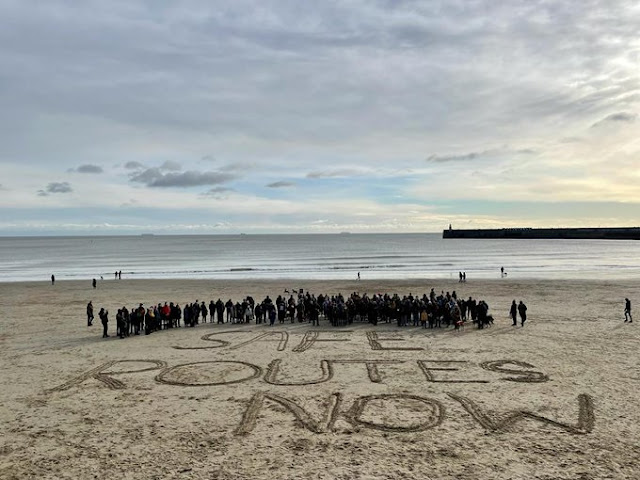 There is an underlying truth about the 27 deaths of people trying to get to the UK across the English Channel. It is a truth you are very unlikely to hear in the acres of coverage this issue gets in the media. The truth is that this is a problem created by a government determined not to give refuge to asylum seekers. It is unspoken because of a political system where the opposition calculates it is not in their interest to mention it either, and a media that thinks that because politicians don’t talk about it that makes it not worth mentioning.

People are risking their lives to cross the Channel because the government has largely cut off any other safe roots for people to claim asylum here. Many people talk about illegal migrants, but there are no legal routes. If the UK was to offer all those currently in France a safe way of getting to the UK, enabling an asylum application to be processed, the criminal gangs sending people across the Channel in unsafe boats would be out of business.

Nor, to dispel another myth widely propagated by Priti Patel and the Brexit press, are most of the people crossing the Channel economic migrants. Nearly all those crossing come from war torn areas or countries with serious persecution, and nearly all claim asylum. Well over 70% of these claims are accepted. It is not the fault of those making these claims that the Home Offices system for processing asylum seekers is so inefficient that even those that are rejected end up staying here.

This UK policy of trying to prevent asylum claims at all costs just shifts deaths from one place to another. A few years ago the headlines were about people risking their lives trying to get on lorries or trains crossing the channel. As the authorities got better at preventing that, people inevitably try crossing the Channel, and gangs will get rich providing the means to do so.

So why is this simple fact, of deaths caused by government policy, hardly ever mentioned? Hereis the generally very good Ros Atkins giving us a lot of information about what he calls migrant crossings, but this most simple and basic fact is not mentioned. This is, I’m afraid, routine. To take just one example, the BBC News at Ten for 26/11/21 had an extended segment on this issue, where the lack of safe routes was not mentioned.

The UK is obliged, under international and domestic law, to accept asylum seekers who want to live in the UK. The 1951 Convention on refugees has been signed by nearly 150 countries, including European countries and the United States. Our current government is attempting to get around this Convention by exploiting the fact that the British Isles are an island, so it is very difficult for refugees to get here.

The policy works, to an extent. In 2020, there were 6 asylum applications for every 10,000 of the population. In the EU the average is 11. The UK is ranked below France and Germany and many others. In terms of actual numbers, Germany and France receivednearly 4 and 3 times as many applicants as the UK respectively. One cost of that policy is a loss of what is often a skilled workforce: about 1,200 refugees are recorded on the BMA’s database. Another cost is deaths in the Channel.

So why have most BBC journalists (exceptions include Newsnightand here) internalised government policy so much that it doesn’t deserve mention? Why are people most of whom will be refugees alwayscalled migrants? One reason is that this is not a party political issue, which for the BBC means whether Labour contests it, of which more later. Another is political history starting with the election of the 1997 Labour government.

As a result of various conflicts around the world, asylum applications to the UK were already increasingsubstantially as Labour came to power. The Conservative opposition and the right wing press started focusing on this issue, often in alarmist terms. As a result, immigration in general became a major issue of concern. Rather than extolling the virtues of immigration, Labour chose to tighten up on rules. As a result, both major political parties and a large proportion of the media started treating immigration and migrants, including refugees’, as a problem.

Did it have to be that way? The basic problem for Labour is that many of their voters are social conservatives, so arguing the virtues of immigration and asylum would be risking losing those voters. The influence of Labour politicians is small compared to the right wing press, Unfortunately FPTP is biased in favour of social conservatives, because social liberals are concentrated in cities. The process of the press and Tory politicians talking up the ‘dangers’ of immigration led to the referendum in 2016 where the UK voted to leave the EU.

I suspect this history leads many to take it for granted that the majority of people in the UK want to restrict immigration. Broadcast journalists are often socially liberal, so they may overcompensate in their reporting. I think it is time to re-evaluate this. Since the referendum, attitudes to immigration have become more favourable (although how much variesby survey), and immigration is no longer the important issue for voters it once was. More importantly, just because one half of the population is socially conservative, that leaves a lot of people who are not.

Most important of all, nothing justifies being economical with the facts when talking about Channel Crossings. I fear what we are seeing here is an example of where media stories no longer reflect reality, but instead reflect what politicians talk or say about reality. The broadcast media owes its existence to politicians (in the case of the BBC and Channel 4 very directly), and so it’s hardly surprising that media content should reflect what politicians talk about.

Another example of this is COVID. The UK over the last few months has been almost the only country that did not demand masks in public places, and UK cases have stayed high partly as a result. By contrast France and Spain, which were in a similar position in the summer, saw cases steadily falling until quite recently. There seems to be almost no discussion of this in the broadcast media. Once Johnson started talking about cases rising again in Europe, broadcasters began talking about COVID once more.

There are three consequences of this. First social liberals, despite the impression (deliberately) given by the Tories’ woke agenda, are not well represented in the media. Second, if politicians are not talking about facts then it is quite possible that the media will not either. Third, this gives the right wing press even more influence on the public debate.

On the issue of people crossing the channel to seek asylum, the right wing press has been playingits usual demonising role. The result is that, although it’s not a top issue, when asked about it half the people polled by YouGov had little or no sympathy for the migrants (sic) travelling from France to England. But just as significant is how misinformed the public is. From the same poll nearly half of people think the UK has done more than its fair share in accommodating refugees, even though the figures above suggest the opposite. Not surprising when this misinformation is reinforced by politicians.

Why is the press and the government telling so many lies about what are still relatively small numbers. Visibility and Farage are reasons, but another is Brexit. The stand out slogan of Brexit was to take back control, but it is clear that the only country that can have any impact in controlling the number of refugees crossing the channel is France. We live in a global world where often to gain control you need to cooperate with other countries, a reality lost in the Brexit debate.

But it’s worse than that. Tory politicians keep talking about refugees having to settle in the first country they arrive in, but nowhere in international law or the refugee convention will you find that. Refugees are free to choose where they apply for asylum. The rule politicians are talking about appliedin the EU. The UK has no automatic right to send these refugees back to France because of Brexit.

Like so much of what this government does, tackling climate change is just for show