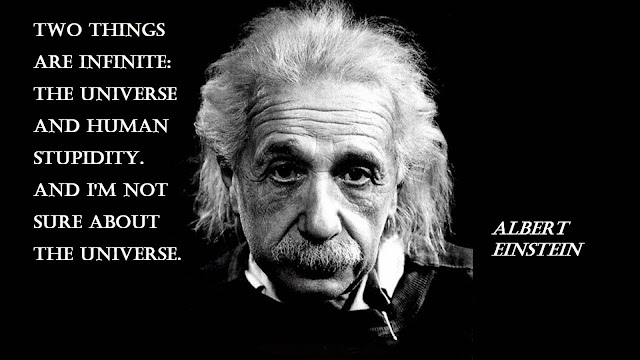 I am not following the buttering approach of Dale Carnegie, “Be hearty in your approbation and lavish in your praise”. So, I might not make many friends.

I have a very low opinion of human intelligence, or intelligence itself. If Google founders were intelligent they would not have tried selling their company for 1 Million USD (400,000 times less than its worth today), Bill Gates would not have rejected to buy Google for 1 million USD (he already had 20 years experience in software industry by then).

Humans are luckier than they think they are. Humans control less than a fraction of a percentage of their life, because the percentage of control is so little BUT the perception does not feel so (we believe we control a whole lot more), that is why we are trapped in ignorance and blindness (aka Maya) and often, quite smug about it. There is no sense of urgency to surmount the matrix of delusion and ignorance.

I think that attitude spills over in just about every discipline, business and companies included because eventually human is the director of the business show. That is why analoguesque companies get boiled like frogs and get voted out by digital divas with slow but sure death.

A lot of companies with “MNC baggage” are not likely to make a mark in developing countries as they do not fully appreciate the Jugaad / Frugal innovation required in these markets.

I know a number of investors look at what has succeeded in the West and then use cookie cutter approach to buying same business models in an emerging country. In my opinion maximum money will not be made in such opportunities. That is why investing will remain interesting ! Companies that ignore social dimension and culture are doomed to stay mediocre.

Some examples of localised business models:

Sending armoured vehicle to villages for Banking in african countries.

A group of people from developing country needed to do was to stretch one meal into two by preserving leftovers and to keep drinks cooler than room temperature—a job markedly different from the one higher-end refrigerators do, which is to keep a large supply of perishables on hand, cold or frozen. Clearly, there was no reason to spend a month’s salary on a conventional refrigerator and pay steep electricity prices to get the simpler job done. And just as clearly, the solution wasn’t a cheaper conventional fridge. Here was an opportunity to create a fundamentally new product for the underserved middle market.

Godrej’s team designed and built a prototype cooling unit from the ground up and tested it in the field with consumers. The result was the ChotuKool (“little cool”), a top-opening unit that, at 1.5 x 2 feet and with a capacity of 43 liters, has enough room for the few items users want to keep fresh for a day or two. With only 20 (rather than the usual 200) parts, it has no compressor, cooling tubes, or refrigerant. Instead it uses a chip that cools when a current is applied and a fan like those that prevent desktop computers from overheating. Its top-opening design keeps most of the cold air inside when the lid is opened. It uses less than half the energy of a conventional refrigerator and can run on a battery during the power outages that are common in rural villages. At just 7.8 kilograms, it’s highly portable, and at $69, it costs half what the most basic refrigerator does. Because it’s the right size for the job, easier to move, and more reliable in a power outage than a conventional fridge, it surpasses the higher-end offering on the performance measures that matter most to these consumers.


In Kenya, for example, banking services are scarce and transferring money is complicated and expensive. Without access to traditional services, many people must use unsafe alternatives such as hawala—an unregulated network of brokers operating on the honor system—or transport cash by bus. The UK-based Vodafone solved this problem by developing a secure, low-cost mobile money-transfer service. Called M-PESA (M for “mobile” and PESA from the Swahili word for “money”), the system is operated by Safaricom, Kenya’s leading mobile network.

It’s easier to reach people who are already spending money to get their jobs done.

It stays devilishly hard to predict success of disruptive products, Tata’s wanted to convert scooter / motorcyle owners to a 4000$ Tata Nano car, but it backfired on psychological grounds of looking cheap. They should have introduced the car in rich markets of Europe first.

Think out of the box, focus on local business models, and be rich.

Disclosure: Invested in companies discussed. Views are personal notions and do not represent any organisation or company. I am not an investment adviser. Investment in stock market can (and many a times do) result in loss of principal capital.
http://www.elevendimension-funds.com

US is becoming a ‘developing country’ on global rankings that measure democracy, inequality